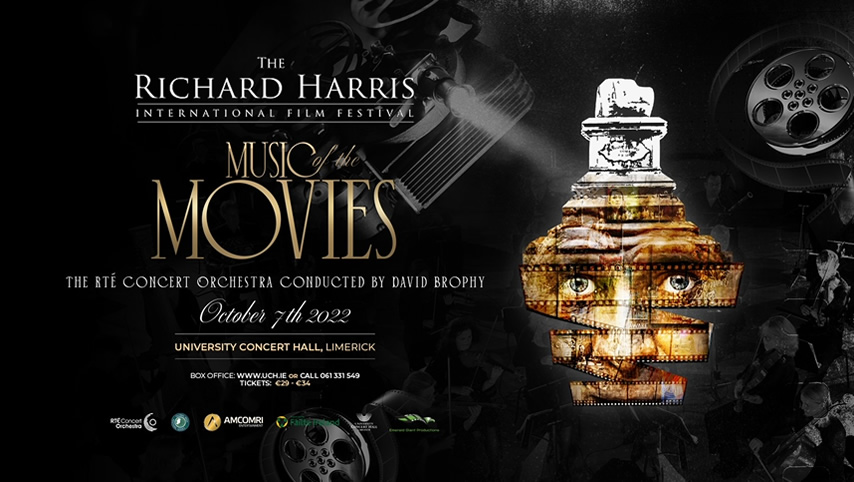 An unforgettable evening of music from the movies of Richard Harris. Join the world renowned RTÉ Concert Orchestra conducted by David Brophy as they thrill the audience with music from films such as Harry Potter, Gladiator and Unforgiven.

Harry Potter is perhaps one of the most beloved film series in history, the magical music composed by Academy Award Winner John Williams is just one of the scores to be featured in this enchanting evening featuring the music from the films of Limerick’s favourite son, Richard Harris.

Taking us on a musical journey through Richard’s momentous film career are scores such as Guns of Navarone, Camelot, Patriot Games, Gladiator and Clint Eastwood’s Unforgiven.

Voted the World’s Favourite Orchestra in 2015 and under the baton of Conductor David Brophy, the RTÉ Concert Orchestra is a world class ensemble delivering an eclectic mix of multi genre orchestral entertainment. Since its establishment in 1948 the orchestra has taken part in a diverse catalogue of performances including emotive occasions such as Limerick native Bill Whelan’s Riverdance.

David Brophy has worked on many of the RTÉ Concert Orchestra’s concerts showing his ability to cover a broad range of styles including elements of pop, new age and contemporary.

David now enjoys a close relationship with both the RTÉ Concert Orchestra and the National Symphony Orchestra in addition to regular appearances as guest conductor with the Ulster Orchestra. His career has seen him conduct throughout Europe, Africa, the United States, Canada and China.

The Richard Harris International Film Festival is celebrating its 10th anniversary this year and in association with the Global Irish Festival Series and Limerick City and County Council is delighted to celebrate the life and career of Richard Harris through this unique concert experience.